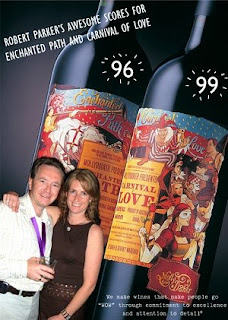 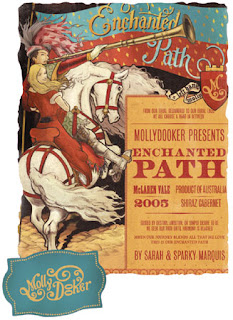 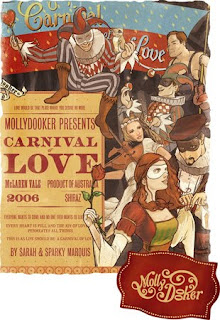 I was browsing in one of my favorite wine shops - also known as COSTCO - when I noticed a very attractive bottle of Australian Shiraz called Carnival of Love (94 points WS) by Mollydooker Winery. I confess I'm not the biggest fan of Shiraz but I was intrigued by this one. It was highly rated by Robert Parker and had an equally high price tag. I decided to pick one up for Thanksgiving Day.
To say that I loved this wine would not come close to expressing my feelings. It was simply fantastic but I'll warn you that it's not for everyone. This is the JAMMIEST wine I've ever tasted. It literally has a blackberry jam finish. It is also a very bold wine. If you're not a fan of big wines, you won't like this one.
I later picked up Enchanted Path (93 points WS) which is their Cab/Shiraz blend and it was also fantastic.
Mollydooker produces a whole line of interesting wines but their top of the line wine is called Velvet Glove Shiraz. I have not tried this one yet but it scored 96 points in Wine Spectator.
Another notable wine they produce is Blue Eyed Boy Shiraz which earned 91 points from Wine Spectator.
Posted by Deandra Grant at 8:43 AM

Email ThisBlogThis!Share to TwitterShare to FacebookShare to Pinterest
Labels: Mollydooker

Have a wine suggestion?

Email me if you find a great wine you think I should try and I'll write about it.